You are here: Home1 / Archive2 / Saeed is struggling for a better catch 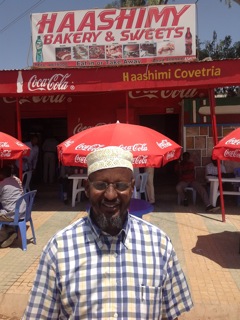 The overall objective of Somali Fair Fishing (SFF) is to stop the recruitment of Somali fishermen and other young men for piracy at the Horn of Africa. The concrete and very specific aim is to support the building of viable and sustainable commercial fishery in Somalia.

SFF’s initial demonstration project is situated in a peaceful area in northern Somalia, namely Somaliland. SFF will develop, build and establish the foundation for sustainable commercial fishery with the aim of making fishing an attractive trade and a legal occupation for a substantial number of Somali people.

SFF involves Somalis living in Denmark as well as the Somali diaspora in other countries of the Diaspora: Somalis who for different reasons have had to leave their home country.

The project reaches out to Somalis with small savings and a desire to come back to Somalia to settle down with their families. SFF’s demo project aims to prove that it makes sense to invest in fishery in Somaliland.

Saeed Yusuf Mohamed is one of the pioneers. He has been fishing out of Berbera in Somaliland since 2007. His story is one we can all learn from.

Saeed Yusuf is 55 years old and a Danish citizen. He came to Denmark as a refugee in 1990 and moved to England in 2002, where he lived for four years before he and his family again settled down in Somaliland.

Saeed Yusuf had a plan. He wanted to buy a fishing vessel for his savings and to provide for his family with the catch. Saeed did what many Somalis dream of doing. Saeed implemented his plan and bought two fibreglass vessels in 2007. He paid USD 22.000 for both vessels and has since invested app. USD 10.000 in buying a new motor, nets, a chest freezer and a little extra gear.

Not himself a good fisherman

He did not become a fisherman himself but a ship owner. “I was not cut out for fishing”, Saeed Yusuf says. He now lives in Hargeisa, the capital of Somaliland, where he runs a small cafeteria.

That is why he has employed a man in Berbera to take care of crews and vessels and to deal with having the fish weighed and transported to the capital, where Saeed Yusuf takes over and sells it to the fish mongers, hotels and restaurants.

Saeed Yusuf is not dissatisfied with the fishing and his investments, but says that he cannot make a living from it. Expenses are too many and too high and there is not enough money to buy necessary new gear.

And although Saeed could borrow money for new equipment, this would not be sufficient. His crews lack knowledge about using and not least maintaining equipment and gear. The very poor infrastructure at the port of Berbera, without ice or cold storage, is also a problem.

The current situation does not make it viable for Saeed Yusuf to invest more in fishery.

15 vessels to be made operational

He is happy with the SFF project and has registered as a participant. And SFF definitely needs Saeed Yusuf and his colleagues. The project needs at least 15 of the 8.5 metre fibreglass vessels that exist in today’s fishery. They are quite old but can still be used.

However, all these vessels need upgrading and alterations in order to secure more efficient fishery. There is a need for better facilities both for the crew and the catch, and the vessels also need to be equipped to use different types of fishing gear. And most importantly there is a need to make it possible to freeze the fish immediately after it is caught.

SFF will bring the 15 vessels up to standard and train the crew and skippers. And the project will implement a simple system with ice, cold storage and the cutting of fillets at the port.

There is a lot of high quality fish in the sea outside the coast of Somaliland, and 50 % of the market for fresh fish in Somaliland is still served by frozen fish flown in from Mogadishu. An extended and consolidated fishery value chain, “from sea to stomach”, will be able to catch, handle and sell at least 50.000 tons annually without in any way threatening the biological sustainability.

It sounds simple and straightforward, but in reality, it has proven to be difficult is to get funds for the simplest and most obvious improvements. One sometimes gets the impression that the real world is only a kind of appendix to the world of hundreds of theoretical reports.

DANIDA, which is the development assistance department of the Danish foreign ministry, has provided the World Bank with 36 million Danish kroner.

The aim is to support the development of local business in Somaliland.

The World Bank in Washington DC has used the funding to establishment a 20 million Danish kroner fund, The Somaliland Fund. The Fund has invited smaller companies in Somaliland to declare their interest in applying for funds.

Saeed Yusuf has filled out the necessary forms, and if he is selected, he will apply. But to receive support he needs to provide half of the necessary amount. It is therefore very uncertain whether the fund will be an option for him.

And support for new equipment only will not provide his crew with the necessary skills for using and maintaining the equipment, just as is does not provide the needed cold storage facilities or ice producing equipment at the port. That is why there is a need for a much more concerted effort and support that looks at the entire fishery value chain.

It is no surprise that the fishing trade in Somaliland needs support. No bigger national fisheries in the world have been developed without public support.

This has also been the case in Denmark and in the EU where direct and indirect public support for fishery has been very substantial. The 20 million kroner in the Somaliland Fund will primarily be used by smaller trading companies. It is doubtful whether companies involved in production will have access to any of it.

Saeed Yusuf Mohamed’s support for SFF’s demo project should be seen in this light. The SFF project is designed to support the commercial fishery full circle from sea to stomach.

SFF looks for joint solutions for the challenges the fishermen face and it will at the same time create employment and incomes, both for the fishermen and for men and women at the port.