You are here: Home1 / Archive2 / A snowball in hell

” I am sick and tired of all white people who only come here to photograph our fish and us”, the skipper says to his friends at the quay at the fishing port in Berbera in Somaliland. 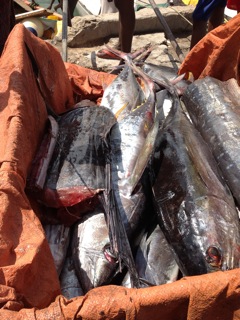 The skipper and his crew are loading the night’s catch, approximately a tonne and a half of fish; big, spectacular tuna fish, swordfish and kingfish, all of exceptional quality from a big sea in which the biggest risk is for the fish to die from old age because there are almost no fishermen.

Somaliland (the former British Somaliland, which is the most Northern part of Somalia) has almost no fishery of its own, and the only other fishermen daring to fish in the Somali waters in spite of the Somali pirates are from Yemen and uses small boats of no interest to the pirates.

The quay is full of people chattering, and there is a lot of laughing in response to the many helpful whites who upon arrival want to meet and talk with real fishermen and to see real fish as part of their efforts to see if and how they might be able to help.

But when they have met with the fishermen and photographed the fish, the local fishermen rarely ever see them again.

“It is very strange”, says Mahmud Farah, a Danish Somali on holiday in Somaliland. He wants to be active in the Danish-Somali organisation Somali Fair Fishing, that through a Sea to Stomach approach wants to kick start sustainable fishery at the Horn of Africa.

I can understand that the skipper is tired of us coming from the western world, people and organisations that have already spent and are still spending lots of money on development and reconstruction in Somaliland. In spite of Somaliland having enjoyed peace for almost a decade, the only thing although it has been peaceful in Somaliland for 10 years now, the only thing the fishermen have received is “training and meetings”.

They have been participating in Western development organisations’ meetings and workshops, and they have been given lunches when attending. They have received badges and posters with logos and snappy project titles from the organisations. But in reality, the fishery has not benefitted from it.

The meetings and workshops stand in glaring contrast to the fact that although the port of Berbera is the only fishing port of any importance in Somaliland, the fishermen do not even have their own production of ice or any modern equipment for storing fresh fish. They have to do with two very old big energy consuming chest freezers.

That is all they have, and even though 150 different types of vessels officially and on paper are connected to the port of Berbera, there are actually only about 10 vessels actively sailing and fishing, explains Josef, the chairman of the association SOMFISH, when he guides me around at the port.

And that is true. The fishermen are, at the moment, catching a lot of fish. The freezers are filled in no time, and the fishermen then have to try to sell their fish in Berbera for next to nothing. They even resort to giving away substantial shares of the catch because it is impossible to sell or store.

Short of everything – except fish

I meet fishermen, who two days after coming back from the sea still have not sold their fish. With their cell phones, they’re trying to sell it in the capital Hargeisa, to some of the numerous hotels and restaurants.

But there are no functioning refrigerated vans in Berbera for transport of local fish. Hotels and restaurants in Hargeisa each us up to 100 kilo of fish fillet per day, but they buy most of the fish from Mogadishu, from where it is flown in. It is easier and faster, but also a lot more expensive.

The frozen fish cannot compete when it comes to quality, but it is never the less priced at USD 5-6 per kilo. In comparison, the fish from Berbera – if it is makes it to the capital – is sold for a dollar or less. Only a minor share of the total consumption is covered by fish caught by local fishermen.

The reason why is clear for anyone who wants to assist in the development of the Somaliland business sector and the economy. The lack of even a minimal infrastructure and professional management of a fish market is a massive problem.

Donor funds leading to nothing

In all fairness it has to be said that we (the white Europeans) have tried developing the fishery in Somalia before. If I remember correctly, Somalia is the one country in the world that has received the most fishery development support.

But investments related to the fishery are 20-30 years old and can be seen in the port of Berbera. They consist of usable fibreglass vessels donated by DANIDA and other donors, and are very much in need of repair.

In the quay area lies what Josef calls “The FAO complex” next to a much bigger “DANIDA complex”: They’re both empty buildings, consisting of defunct workshops, cold storage and freezers for millions of development kroner. Due to the civil war and other misery, they have never been used.

Today there is peace in Somaliland, but apart from the buildings and the area in the quay there is not a lot Somali Fair Fishing can put to use in the new Danish-Somali demo fishery project.

Somali Fair Fishing aims to prove that commercial fishery in Somaliland is not just possible it is also an absolute necessity.

Somali Fair Fishing is works to establish the foundation of professional commercial fishery, and the aim is to make it big enough that it in 10-15 years time will make it possible for Somaliland to stand alongside Denmark in international statistics of the world’s fishery nations.

The method is not new gigantic projects or investments, but very specific initial support for improving the catches for a small group of active fishermen, combined with the management of and support for development of the right, realistic yet modest infrastructure and marketing.

The fishery will be able to develop and grow from this, and it can become a very important export business. It is in everyone’s interest that Somaliland, with its more than 800 kilometres of coastline, bordering on the sea with an abundance of quality fish, becomes an important fishing nation.

A boy comes running behind a wheelbarrow. It carries a bag with ice, which is melting faster than the boy can run. Josef tells us that the fishermen have to pay fortunes – as much as they pay for fuel – for the little ice that they are able to buy in the town.

The ice comes from a small ice machine, brought to Berbera by a Norwegian Somali. On a good day it may be able to produce 1-2 tonnes of very liquid ice.

With poor transport options, with way too little ice and temperatures above 40 degrees Celsius, the few fishermen are still trying to save and sell their fish. It is fish we might not be able to pay for if sold under normal conditions in our part of the world: Here, they are sold for next to nothing. And a lot is wasted.

I see a clear parallel to the famed snowball in hell.

But I can also see the potential to create a situation where the fish and the fishery become a vital component in the peaceful development and economy here at the Horn of Africa.